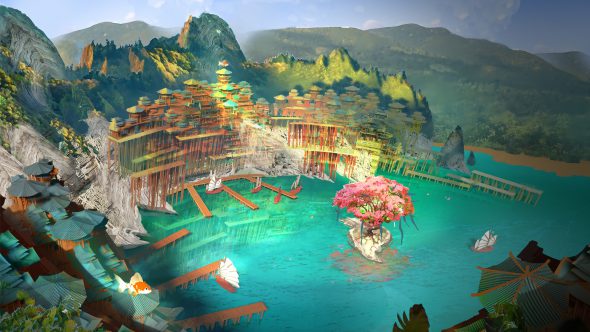 The Guild Wars 2 team is preparing to sign off for our annual winter break, and we’re sending you and your loved ones all our best wishes for the New Year. We’ll be back on January 4, ready to begin the final stretch of our journey to Cantha!

Thank You from Team ArenaNet

We want to extend a special thanks to our community for your generosity, kindness, and companionship during our 2021 Extra Life Game Day event. With your help, we raised over $100,000 USD to benefit Children’s Miracle Network hospitals, for a total of more than $500,000 USD raised since we began participating in Extra Life in 2018. This year was our best ever—and we’re already looking forward to breaking our record again in 2022!

There are plenty of preparations to make before we set sail, and you can still catch up on the Seasons of the Dragons meta-achievement and earn legendary rewards!

In May we kicked off Living World Return, a retrospective playthrough event to help new players catch up on the story of the Dragon Cycle and to send level 80 players off to Cantha with some powerful equipment. During their spotlight weeks, episodes of Living World from Seasons 2 through 5 were free to unlock, and new achievements appeared in the story journal.

The Seasons of the Dragons meta-achievement will always be available. Complete the Living World Return meta-achievements whenever you like and earn an Ascended Weapon Chest, a Fragment of Prismatic Light, a 32-Slot Hero’s Trusty Backpack, the Returning Champion title, and a Prismatic Champion’s Regalia legendary amulet. When Guild Wars 2: End of Dragons arrives, you can redeem the Fragment of Prismatic Light for your choice of the new legendary precursor weapons.

We revealed the first gameplay details about the expansion during our July 27 First Look livestream. Since then, we’ve released more information about many of the expansion features:

Thank you to everyone who participated in the four beta preview events and took the new elite specializations and siege turtle out for a spin in Tyria! We can’t wait to see them out in the wild again.

Shortly after we come back from our holiday break, we’ll give you more information on our schedule for livestreams and activities leading up to the release.

While we’re looking forward to the future, have you considered what jade tech can do for you? Soon we’ll be ready to tell you all about the final Guild Wars 2: End of Dragons Mastery line—and all its practical uses for your busy adventuring lifestyle. Stay tuned!