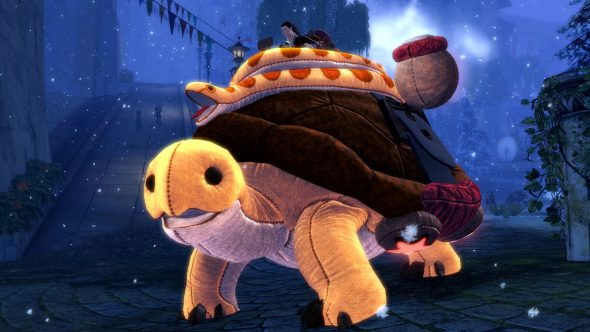 Dominate the pillow-fighting fields with a set of cannons that can outgun any hostile toys you encounter. Just try not to fall asleep in that plush driver’s seat.

For the next week, the Knife Tail Gang Hunting Bond will once again be available in the Gem Store, and we’re offering a reward for spreading the holiday cheer!

Black Lion Chest keys will be rewarded to participating players via in-game mail the week of January 15.

Log in to Guild Wars 2 within the next three weeks and claim ten free Transmutation Charges and a Wintersday Mini Gift from the Gem Store!

For this week only, get 40% off Bag Slot Expansions (limit of two per account). We’ve also raised the maximum per-character bag slot limit from ten to twelve.

Fancy some ice fishing? Spread the holiday cheer across the oceans with an iceberg propelled by Wintersday hopes and dreams!

This skin is available exclusively as an uncommon find when opening Black Lion Chests. It will permanently unlock a new appearance for your skiff in your account wardrobe.

In every Black Lion Chest you open for the next four weeks, you’ll find the Evon Gnashblade Wintersday Gift. Open this gift box for a chance at up to seven random items from a massive list of goods that includes rare crafting materials, infusions, and more!

Take advantage of the new Mini Jade Bot and carry this cuddly cat with you everywhere! For a limited time, the Cuddly Cat Jade Bot Skin is back!

The Knife Tail Gang have broken into the Black Lion Trading Company vaults!

Use this bond to hunt Knife Tail Gang members. While bonded, any kill worth experience points has a chance to reveal one of the Knife Tail Gang! Each bond will allow you to loot a piece of Recovered Black Lion Goods, which are yours to keep. Recovered goods will always unlock a cosmetic option from the Black Lion Trading Company in your wardrobe—weapon skins, exclusive dye colors, and even mount skins!