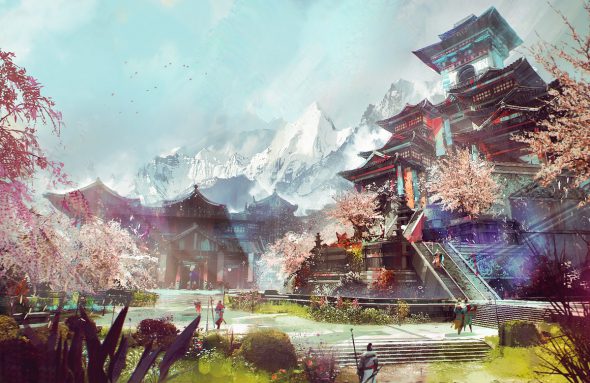 As promised in last month’s “Future of Guild Wars 2” blog post, we’re back with another helping of the latest happenings here at the ArenaNet studio. In this edition, we’ll be touching on Guild Wars 2: End of Dragons™ meta-events and rewards, DirectX 11, World vs. World, and our ongoing new-player improvement testing.

From the outset, we designed the final boss of the Guild Wars 2: End of Dragons Jade Sea meta-event to be more challenging than most of our existing open-world experiences. It’s the epic finale of a story arc told over the course of 10 years, after all.

Over the past month we’ve been making incremental balance adjustments to the meta-event’s final boss, with the goal of making it more accessible while still retaining an increased difficulty level. Between the mechanical changes we’ve implemented and the community’s willingness to rise to the challenge, we’ve seen the number of successful clears increase dramatically in recent weeks. For context, in the first few weeks of March, only about 15% of boss attempts ended successfully. Most recently, that number has risen to over 60%, putting it closer to existing world bosses and meta-event success rates while still being more challenging than any of them.

In terms of balance, the fight is very close to where we’d like it to be. However, we’ll continue to monitor community feedback and completion rates and, as always, make adjustments as needed. Next week’s release will also address a bug that causes the final boss to enter the “bite” phase more frequently than intended.

In the weeks following the release of Guild Wars 2: End of Dragons, we heard you loud and clear that the rewards for the new meta-events needed a little more “oomph”—especially when you consider the difficulty and the time required to complete the events. In other words, there needs to be a stronger incentive to replay the content after the initial playthrough.

Since then, we’ve removed a significant number of junk items from the loot tables (so you’re more likely to get higher value items), increased the value of the reward chest contents, and added a Hero’s Choice Chest for successfully completing these events. And while these are good improvements, we recognize that a stronger incentive is needed if we want these events to be a long-term addition to the endgame open-world experience. This is especially true for Dragon’s End, which contains our most challenging meta-event to date. To help address this, in next week’s update we’ll be adding a new Void-themed infusion as a rare drop to the Bounty of Dragon’s End loot table.

The Bounty of Dragon’s End can be earned daily for successfully completing the meta-event, and up to five additional chests can be purchased each week from the vendor Myung-Hee, located in the Shing Jea Monastery in Seitung Province.

In the July 2021 Studio Update, we announced that we’d be upgrading our graphics API from DirectX 9 to DirectX 11 (DX11) as part of our long-term support plans for Guild Wars 2. This upgrade is the required first step in unlocking client performance improvements and graphical upgrades made available by DX11. James Fulop, a Senior Engine Programmer on Guild Wars 2, posted a blog last year that covers the technical details of the upgrade.

In September of last year, we introduced DX11 as an opt-in beta, and since then the team has been hammering away at bugs and crashes related to the upgrade. Today, the feature is stable enough to move to the next phase.

With the May 10 release, we’ll enable DX11 by default for all newly created accounts. This means that all future players joining the game (whether it’s from our official site, or eventually from Steam) will benefit from DX11 from their very first log-in. We’ll also remove the “beta” tag from the feature in the settings menu.

As a note, existing players who are not participating in the DX11 beta will not be automatically opted-in on May 10, but if you’d like to start using DX11 you can enable it from the graphics settings menu. We didn’t expect DX11 to deliver substantial performance improvements all on its own, but we’re seeing plenty of reports that indicate it’s a nice bump to frame rates for many, so we encourage you to start using it! In the long run, we plan to deprecate DX9 support and move to making DX11 the default graphics setting for all players (new and veteran alike). This will open the door for further improvements.

In our last studio update, we mentioned that we’re actively investigating the queue bug that causes players to get thrown to the back of the WvW queue after waiting in line on reset nights. It’s frustrating to experience, and with the deep queues that happen during World Restructuring beta events, it usually means that impacted players log off for the night rather than wait in line again. Unfortunately, this issue isn’t something we’ve been able to reproduce in our dev environment. To help diagnose the issue, in the April 19 update, we’re adding new data logging to the game that will allow us to collect the information needed to identify the root cause.

In the meantime, the team has shifted their attention to designing the user experience surrounding Alliances, a sub-feature of World Restructuring that allows multiple guilds to matchmake together. We’re also in the early phase of designing our next batch of rewards improvements for the mode. We’ll have more details on this in a future blog.

Edge of the Mists Instancing Bug: Attention all enjoyers of player-organized GvG (guild vs. guild) gameplay: There’s a fix for the Edge of the Mists instancing issue coming with next week’s release! You’ll be back to pin sniping and dodging in unison in no time!

In the March 29 update, we made a change to Jade Bot Scavenger Protocols that makes them no longer grant materials or trophies for player kills. This change was intended to address an exploit elsewhere in the game, but WvW players took splash damage in the process and were unfairly nerfed. We’ll revert this change for WvW in the April 19 update. Happy scavenging!

We made some significant changes to WvW profession balance in the March 29 update, and for the most part we like what we’re seeing. However, there are a few lingering issues that we don’t want to wait until June’s profession update to address. We’re still monitoring and formulating our plan on this front so we’re not ready to share details quite yet, but we wanted to let you know to expect some additional WvW-specific balance adjustments in the May 10 release.

As we mentioned in last month’s studio update, we’re taking steps to ensure a smooth launch on Steam later this year. This launch is an important piece of our long-term plans for growing the community, so we want to get it right. To prepare for this, we’ll experiment with some changes to the new-player experience with the goal of improving new-player retention. To be clear, we’re not undertaking huge overhauls at this stage, but rather focusing on smaller changes that can have a big impact on the player experience. We tried the “overhaul” approach back in 2014 with mixed results. In fact, some of our experiments this year will explore reversing some of those 2014 changes.

Typically, these tests will only impact small segments of new accounts for a limited duration. This is referred to as “A/B testing.” We’ll deploy the changes to a small number of new players, study the results, and then decide whether to make the change permanent, further iterate on it, or remove it from the game.

It’s worth noting that we expect some of our tests (or variations of a test) to not work out. That’s the nature of an experiment. When we’ve had a successful test, we’ll roll the change out officially and communicate those changes in our release notes.

Most of the players reading this won’t be impacted by these experiments. However, some new players might take notice, so we wanted to give you a heads-up and make sure you’re in the know in case you see some curious comments.

In last month’s update, we stated that the health and well-being of our employees is a top priority for the studio. As exhilarating and fulfilling as it is to ship an expansion, it can also be stressful at times and comes at the tail end of two years of fast-paced development. And since then, the team has been working diligently to address bugs and feedback from the Guild Wars 2: End of Dragons launch.

It’s time for a breather. The studio is taking this week off to recharge our batteries before we get fully ramped up on our new projects and initiatives. In fact, many of us might be outside touching grass and enjoying the sunshine at this very moment! We’ll be back to it on April 18.

That’s all for this edition! If you haven’t done so yet, please check out the “Future of Guild Wars 2” blog post from last month. It contains a lot of juicy details about our long-term plans for Guild Wars 2 and includes a road map of what’s to come over the next three months.

As always, thank you for being a part of the Guild Wars community.

We’ll see you in the game,
—Josh, Amy, and the Guild Wars 2 Team