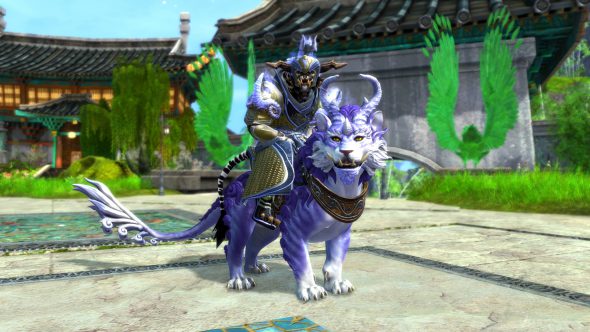 This fluffy friend headbutts people who make incorrect decisions—don’t end up on the wrong end of its horns. Adopt the Unyielding Haechi warclaw into your mount collection today.

What? No, it’s just, like, generically divine. Well, I mean, we can’t say Balthazar for…obvious reasons… Look, its regalia fit for a god-king! What more do you want?!

With the release of Guild Wars 2: End of Dragons™, we added the ability for players to unlock the Arborstone Revitalization Mastery, which allows you to gain a Well Rested bonus when spending time in Arborstone. This effect provides up to a 25% bonus to all experience gained for up to four hours. However, unlike other bonuses to experience in the game—those obtained through food or utilities, for example—this effect has very specific requirements for how you obtain it or increase its duration.

We’d like to add more ways for players to take advantage of this bonus and make it available to players who have yet to fully unlock their End of Dragons Masteries. And what better way to let a weary commander rest and recover than taking a seat on their favorite chair?

With this update, we’re adding a new functionality to all chair items. If you’re currently affected by the Arborstone Well Rested bonus, sitting in a chair will increase the duration of that effect . Each minute spent sitting in your chair will increase the duration of the Well Rested bonus by eight minutes, up to a total of four hours.

Additionally, even if you do not have access to Arborstone or its Masteries, you can still take advantage of this new functionality. Resting in a chair anywhere in the world will grant you five minutes of the Resting effect. Remaining in the chair until the Resting effect expires will grant you one hour of the A Little Well Rested bonus, granting you 5% bonus experience for its duration.

For the next two weeks, we’re offering a 20% discount on various weapon skins we’ve added over the years!

Complete the Seven Reapers armor set with this final piece. Embody the ancient heroes who once served Grenth in the battle against the former God of Death, Dhuum. Available exclusively from Black Lion Chests.

In every Black Lion Chest you open for the next two weeks, you’ll find a Fine Black Lion Dye Canister—Red, which can be exchanged for the following four exclusive red dyes: 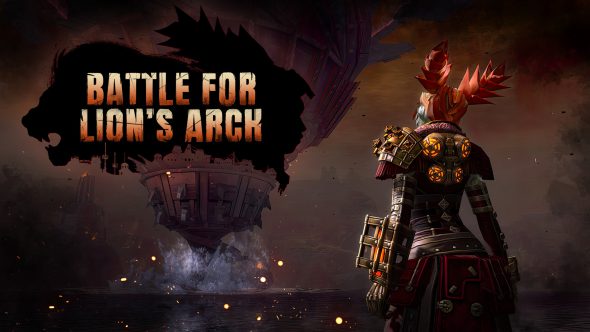 The fifth and final episode of Living World Season 1 is now playable for free in your story journal. This chapter brings Season 1 to a close and finally bridges the longstanding gap between the core game and Living World Season 2. The complete saga of Guild Wars 2—from the original release to End of Dragons™—is now fully playable from start to finish.

This content returns for the first time since its initial release in 2014, along with new and returning rewards and achievements. This episode and all other Season 1 episodes are free, permanent additions to the base game and are available to all players.

To begin this content, navigate to the story journal in your Hero panel, select “Living World Season 1,” then select “5. The Battle for Lion’s Arch.” Click “Play This Episode,” and you will receive a letter from Logan Thackeray requesting your presence at Lornar’s Pass.

The archvillain Scarlet Briar now descends upon Lion’s Arch with all her deadly forces. Rally together and defend the besieged city in the new publicly joinable instanced battle, the Battle for Lion’s Arch. Join the fight now by speaking to Lionguard Peltgnaw in the Gendarran Fields, just outside the gates of Lion’s Arch.

Completing the Lion’s Memory achievement—a meta-achievement that includes content from all of Living World Season 1—will also unlock the Lion’s Pride, a permanent teleportation item that will allow you to visit a Lion’s Arch that has yet to be visited by Scarlet Briar’s destruction.

Check out the full notes for this release on the official Guild Wars 2 forums.