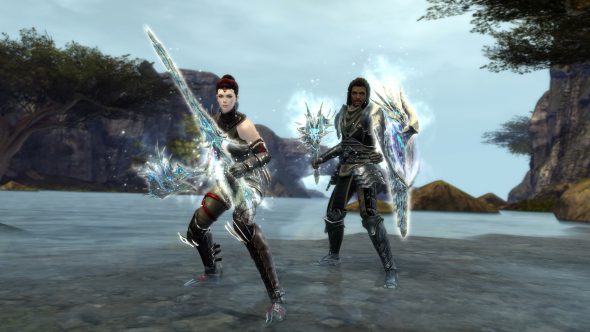 Following our previous summer roadmap, we’d like to give you a high-level look at our plans for Guild Wars 2 for the remainder of the year.

The sixth beta event for phase one of the WvW World Restructuring feature will take place from October 14 through October 21. The beta event will begin and end with each region’s respective weekly World vs World match reset. If you’re unfamiliar with this feature or our plans for it, you can learn more about it here.

During the beta, you’ll be able to select one of the new WvW-exclusive War Machine weapon skins for completing an achievement tied to beta participation. We’ll also be bringing back the Call of War special event. Earn increased WvW rewards including double WvW experience, increased WvW reward track progress, and a bonus to magic find while in WvW.

The World Restructuring system allows you to play WvW with a guild of your choice while the beta event is active. The in-game option found in the WvW menu that allows you to select a WvW guild will be available on October 7. You must make your guild selection by 11:59 p.m. Pacific Time (UTC-7) on October 13 or you may be matchmade as an individual for the beta event (i.e., you and your guild will be placed on different teams).

With our October 4 update, we focused primarily on our competitive game modes. Going forward, we’d like our future profession balance updates to contain changes relevant to all game modes. We plan on having a preview for this update available for public feedback on the official Guild Wars 2 forums a few weeks before the update releases. We’ll be following the conversation and adjusting our plans as needed.

Following our previous Aurene-based legendary weapon skin variants, we have two more skin types coming this year inspired by the Elder Dragons Jormag and Primordus. After binding an Aurene-based legendary weapon to your Legendary Armory, visit Leivas at Aurene’s Enclave in Seitung Province to unlock the collection The Legendary Facets of Aurene and begin working on acquiring these new skins.

For the sixth year in a row, Team ArenaNet will be supporting Extra Life! We have a variety of exciting in-game and out-of-game events planned during this year’s 24-hour Game Day stream. Join us in supporting Children’s Miracle Network on November 4!

The Shadow of the Mad King event returns! Tyria’s annual Halloween festivities will be active from October 18 to November 8, and available to all players level 10 and above. A new set of rewards will be added, including brand-new weapons, minis, and guild hall decorations!


Wintersday is fast approaching! The Crown Pavilion in Divinity’s Reach will be snowed in once more from December 13 to January 3. Earn new weapon skins and minis while you fight the rogue toys of Tixx’s Infinirarium or fight your friends in the “capture the flag”-style Snowball Mayhem!

For players looking for a greater challenge, a challenge mode version of Old Lion’s Court will be released with our November 29 update.

Here’s a brief overview of our major release dates through the end of the year.