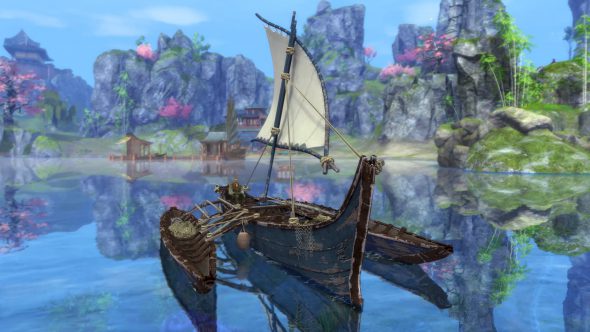 Guild Wars 2’s tenth anniversary is just around the corner! We’re kicking off this occasion with a free Black Lion Chest Key in the Gem Store. Only available today.

If you’re longing for a rustic gateway, this new skiff skin has the perfect weathered look for a cozy voyage. Sit back and enjoy a pleasant day at the lake.

No fish will be able to resist the azure shine of these gorgeous, magic-imbued crystals. Just beware of rogue skritt.

Choose your favorite items from a huge selection with Black Lion vouchers, which are available for a limited time at 10% off. 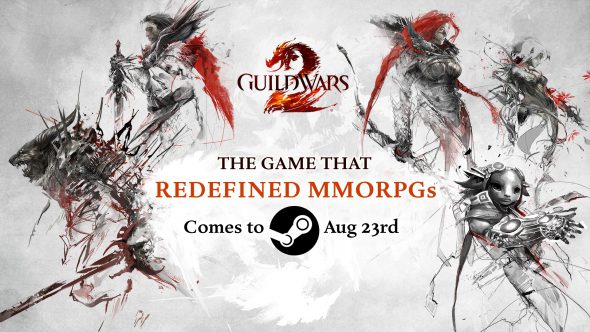 ArenaNet was founded over twenty years ago with a simple yet ambitious mission: challenge conventions in the MMO genre and usher in a new era of online role-playing games. This mission led us to create of the world of Tyria, a place we first explored together in Guild Wars: Prophecies® in 2005. It was different, and our players knew it, too. Who ever heard of a successful online role-playing game without a subscription fee? Well, the idea caught on, and its success allowed us to double down with a sequel: Guild Wars 2.

Guild Wars 2 launched on August 28, 2012, and since then, over sixteen million players from across the globe have stepped into Tyria. Later this month, we’ll reach an incredible milestone by celebrating the tenth anniversary of the Guild Wars 2 launch. Together, we’ve embarked on epic adventures, forged lifelong friendships and rivalries, created countless memories, and defeated a few dragons in the process, too. Ten years is a remarkable achievement for an online game, especially when you consider that many don’t make it through the first. We continue to be thankful to you, our community—we’re here today because of your support and trust.
We took an innovative, player-first approach to Guild Wars 2, challenging conventions in the same spirit as the original Guild Wars . We created an immersive world that focuses on fun rather than endless gear grind—a game that respects your time and never invalidates your hard work, where you’re always happy to see another player. We did it without charging a subscription fee or introducing pay-to-win monetization. We took risks, and we continue to take them.

Unfortunately, many of the player frustrations that we observed in the industry during Guild Wars 2‘s early development are still prevalent today. At ArenaNet, we’re gamers just as much as we’re game developers, and that’s why it’s important to us that we continue to stand by our values and our players even when it proves to be a more difficult path. We want to build the kinds of games that we want to play. Thankfully, we know there are a lot of gamers out there that feel just like we do. We’re celebrating the tenth anniversary of Guild Wars 2 by reaffirming our commitment to being different, honoring our community, and introducing the world of Tyria to an entirely new group of players who are also looking for something different.

It’s time to tell your friends to update their Steam wishlists—we’re pleased to announce that Guild Wars 2 will launch on Steam on August 23 at noon Pacific Time (UTC-7)! This is something we’ve wanted to do for a long time, and the tenth anniversary felt like the perfect moment to make it happen.

The Complete Collection won’t be immediately available to players outside of Steam, but we’ll be working to add it to our web store and the in-game store for players with accounts created via GuildWars2.com in the near future. (Note: Existing Guild Wars 2 accounts can’t be linked to Steam and vice versa. Please visit our knowledge base for more info.) Additionally, we’ll be making it clear on our Steam page that Living World seasons must be purchased separately from expansions. No surprises.

We want to make the most of the Steam launch, so over the past few months we’ve been working on improvements to the new player experience. We’ve improved leveling pacing, updated default options and key binds to be more sensible, added multiple tiers of new achievements that guide players up through level 80, added a free trial for the raptor mount once players reach level 10 (which becomes a permanent unlock after purchasing an expansion), adjusted level-up rewards and Black Lion Instant Level 80 Tickets, updated early game content like world bosses with revised mechanics and tutorials, streamlined dungeon currencies and increased their rewards, made it easier to get into raid content, added accessibility options, improved the player experience in story instances, revamped fractal instabilities, improved raid and Strike Mission rewards and currencies, removed tedious mechanics like equipment repairing, fixed some long-standing content bugs, and implemented DirectX 11 to improve game performance. We also released the first three episodes of Living World Season 1, which gives new players a better understanding of the story as they head into later content. The fourth episode will drop on September 13.

We’re happy to report that our metrics show that these changes have made a significant impact, and we’ll continue to make additional improvements in the coming months as we monitor the Steam launch. We’ll see a steady stream of new players coming into the game from Steam moving forward, so even changes that come after launch will be beneficial. Overall, we’re feeling pretty good about the balance we struck between investing in the new player experience and making progress toward developing future content for our veteran players.

We’re incredibly excited about the upcoming Steam launch, and we hope you’ll join us in shouting it from the rooftops—tell your friends, family, neighbors, and of course your gamer pals! This is the perfect time to join the Guild Wars community.

It wouldn’t be a true celebration if we didn’t show some love to the community that’s supported us all these years. When you log in on August 23, you’ll find a new series of achievements waiting for you that will take you on a journey to experience the best of Guild Wars 2: world bosses, Guild Wars 2: Heart of Thorns, Guild Wars 2: Path of Fire, Guild Wars 2: End of Dragons, Living World, World vs. World, Player vs. Player, and more. As you complete these tasks, you’ll earn Proofs of Legend, which can be traded in for the new Decade armor set.

A +30% bonus to karma, magic find, and PvP and WvW reward-track progress will be active for one week starting on August 23.

As is traditional, we’ll also have a wide range of Gem Store sales to celebrate the anniversary, and maybe even a few freebies to collect (spoiler: mount skin).

Members of the ArenaNet Partner Program will be streaming a wide variety of content during the Steam release week and tenth anniversary (and beyond) to showcase all facets of Guild Wars 2: story content, raids, Strike Missions, fractals, Player vs. Player, World vs. World, and more. There will be something for everyone.

Stay tuned for more information on how to participate!

A Call to Arms

When Guild Wars 2 launches on Steam on August 23, we’ll have a wave of new players entering Tyria for the very first time, and those players will be looking for new friends and communities to call home. We hope our veteran players will join us in welcoming these new players into our world with open arms. We’re stronger together!

Beyond the tenth anniversary and Steam launch, there’s so much on the horizon that we’re excited about. Some of the big items are:

The final two episodes of Living World Season 1 Return (plus a new Strike Mission and challenge mode).
A new location and story to experience in Cantha.
World vs. World updates, including World Restructuring and Alliances.

Not to mention that our next expansion is in early development! There’s never been a better time to be a Guild Wars 2 player.