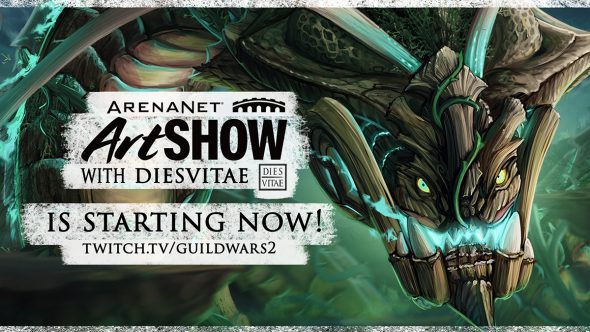 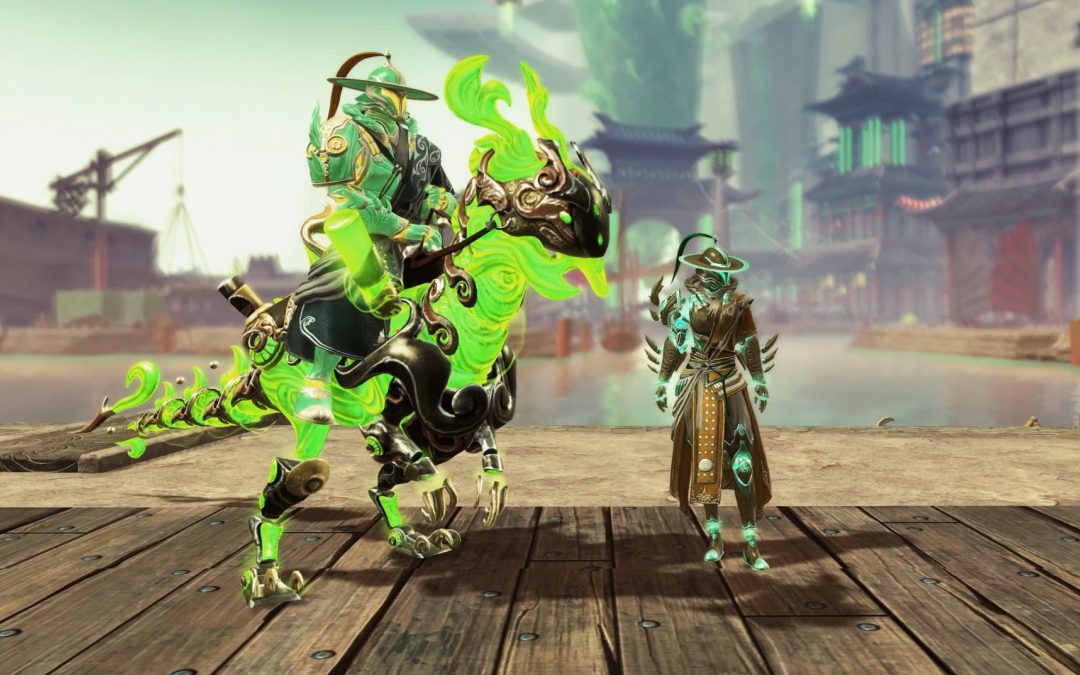 The Robotic Future arrives with the Jade Tech Appearance Package

With magnetic pulses, your soul weaves through a machine’s core. Leave your mortal body behind and embrace your jade tech self today! This package includes a Jade Tech Outfit, a Jade Tech Raptor Skin, a Gold Essence Weapon Choice, five Jade Dye Kits, and a Total Makeover Kit.

Greetings from the Mists! We’re happy to announce that the fourth beta event for phase one of the World vs. World World Restructuring feature will take place from August 12 through August 19. The beta event will begin with each region’s respective weekly World vs World match reset. If you’re unfamiliar with this feature or our plans for it, you can learn more about it here.

What’s the goal of this beta event?

As mentioned in our June 24 WvW update, this event will allow us to test several back-end changes that we’ve been working on over the past few months. Most of these changes won’t be visible to players (unless things go horribly wrong!), but they will allow us to gather new data and stress-test some code changes. It will also give our new WvW team members (myself included!) our first experience with running a WvW World Restructuring beta event.

What’s new in this beta event?

We hope to test a new internal deployment system that automates many aspects of executing a World Restructuring beta, including the steps involved in team creation and matchmaking. It should simplify the internal process of hosting beta events and make it less prone to human error. This is a big step toward having the feature enabled full time on the live game servers without manual upkeep by our Platform Engineering team.
We’ve reduced the likelihood that players will be placed on the incorrect team or realm (assuming they properly selected a WvW guild prior to the deadline).
We’ve implemented bug fixes and mitigations for the “queue bug.”

A WvW bonus experience event will be active between August 12 and August 19 (100% bonus to World Experience, a 25% bonus to reward-track progress, and a 50% bonus to magic find).

Which changes are NOT in this beta event?

The Alliances component of World Restructuring and the recently announced Objective Scaling Rewards feature are still in development and aren’t ready for public consumption quite yet. Please check out the June 24 WvW update for the latest information on these features.

What do I need to do to participate?

You must select a guild to play with for this beta event. The in-game panel found in the WvW menu that allows you to select a WvW guild will be available on August 2. You must make your guild selection by 11:59 p.m. Pacific Time (UTC-7) on August 11 or you may be matchmade as an individual for the beta event (i.e., you and your guild will be placed on different teams).

As always, we’ll be watching the official forums and social media for feedback. So, sharpen your blades and get your spells ready! Let’s do this! 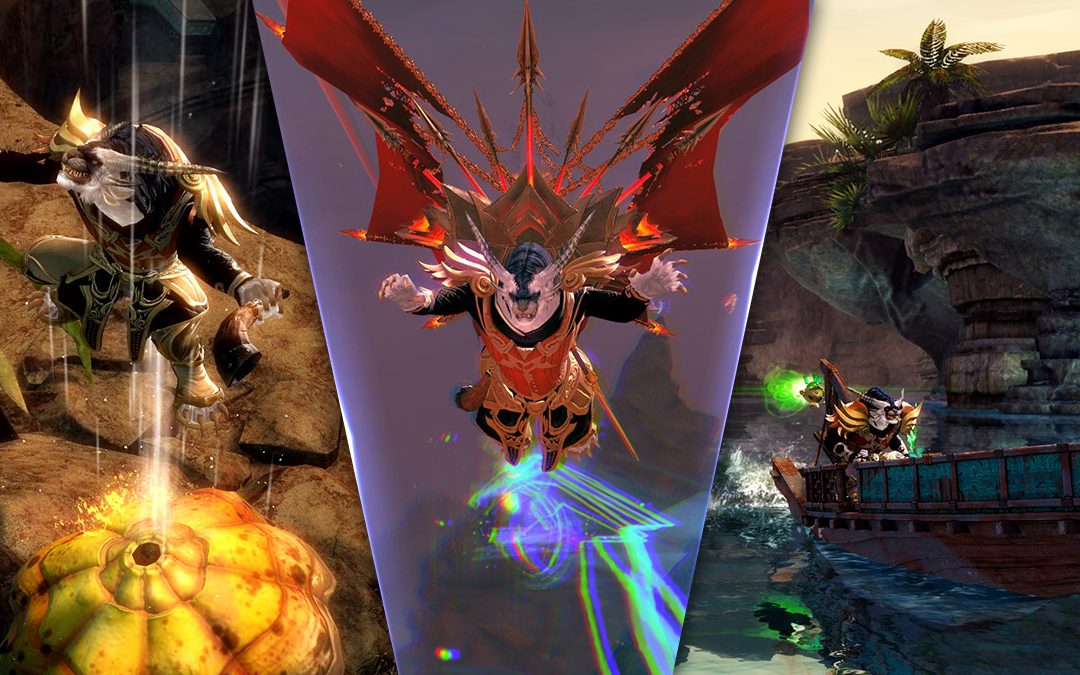 Once you have a solid collection of mounts, you’ll be ready to explore every inch of Tyria—but there are even more ways to travel! In this blog, we’ll look at some of the other movement-focused Mastery tracks and how to use them.

If you’re just getting started, check out the first and second posts in this series for an overview of the available mounts and what you’ll need to start collecting them.

Gliding is a versatile, easy-to-use method of getting down from high places without plummeting to your doom. It’s one of the first Masteries you’ll unlock after beginning the Guild Wars 2: Heart of Thorns story, and if you own Guild Wars 2: End of Dragons, you’ll unlock it right away when you enter Cantha.

Deploy your glider in mid-air by pressing the key you use to jump and put it away by pressing that key again. Gliding consumes endurance until the fifth Mastery tier is unlocked, and your glider will automatically deactivate when it’s depleted.

With Glider Basics alone, your glider endurance is limited&and depending on the height you’re falling from it may not be enough to get you safely to the ground. Endurance refills when your glider isn’t active, so if you time your glider activations carefully you can slow your descent enough to avoid fall damage.

As you level up your gliding Mastery, you’ll learn how to use the environment to your advantage. Flying into updrafts will give you a boost and restore your endurance. In some areas—especially Heart of Maguuma and Living World Season 3 explorable zones—you’ll find clustered updrafts you can use to chain-boost to new heights.

After you unlock Advanced Gliding, you’ll only need endurance to control your glider using the Lean Techniques Mastery. The final Mastery tier, Ley Line Gliding, allows you to ride exposed ley line energy currents. Long ley lines can even take you on a relaxing tour around large areas of a zone!

Guild Wars 2: Heart of Thorns and Living World Season 3 content is difficult to explore fully without unlocking your glider and its Mastery track, and most of Bloodstone Fen must be navigated with a glider, griffon, or skyscale.

Even with flying mounts at your disposal, gliders are handy for making precision jumps and quick descents. But keep an eye out for warning messages when you enter an area with a jumping puzzle—if you don’t leave the area or land quickly, your glider will automatically deactivate to prevent cheating.

These humble fungi are common in Guild Wars 2: Heart of Thorns and Living World Season 3 areas. Like the springer mount, you can use them to bounce up cliffsides and other vertical barriers, but mushroom bouncing has a set trajectory. In Heart of Maguuma and Living World Season 3 explorable zones, some hidden areas and tricky environments are easier to navigate by hopping on a mushroom and landing in a predictable spot.

The Bouncing Mushrooms Mastery is the first tier of the Guild Wars 2: Heart of Thorns Itzel Lore Mastery track, and it doesn’t require any further upgrades. If you enjoy mushrooms for their variety and charm, the Itzel will also teach you to use Blazing Speed Mushrooms and Adrenal Mushrooms— and the Itzel Poison Lore Mastery is needed to survive some deadly Heart of Maguuma environments.

After completing Hall Director Soohee’s renown heart in Seitung Province, she’ll sell you a personal skiff. Like the skimmer mount, skiffs will carry you across Tyria’s oceans and lakes—but they’re the best option for relaxing out on the water.

Up to four people in your party or squad can join you on your skiff, and after you drop anchor, you can even get up and walk around. Casting your line from a skiff is the only way to gather from offshore fishing holes.

Unlocking your skiff’s Mastery tiers will give you boosts to travel speed, hit points, and fishing power. After unlocking the Depth Charges skill, you can sink any enemies that dare to disturb your quiet time.

Jade bots are helpful friends powered by Canthan jade tech. You can unlock yours after completing The Scenic Route, a chapter of the Guild Wars 2: End of Dragons story.

These little bots will let you access zip lines for fast travel in Canthan explorable zones. As you unlock its Masteries, your jade bot can give you a boost in the air while gliding and even set up a personal waypoint for you.

You can customize your jade bot using modules. Service chip modules include the Skiff Supercharger, which increases your skiff speed, and Jade Assistant: Gliding Booster to help you reach new heights with the Gliding Booster Mastery.

The siege turtle is a new two-player mount available in Guild Wars 2: End of Dragons. It’s the only mount you can use in combat, so invite your favorite adventuring partner to your party and let them handle the big turtle artillery!

Before you unlock the siege turtle, you’ll need to reach the expansion’s final explorable zone. There, you can either complete the zone’s meta-event to obtain a turtle egg or purchase it from a peddler for 200 Writs of Dragon’s End (rewarded for completing events).

Rota, the character who will guide you through the collection achievements to unlock your turtle, is found in Arborstone. You’ll gain access to this area and the Arborstone Revitalization Mastery track after completing the chapter Fallout in the Guild Wars 2: End of Dragons story.

Don’t forget to check out our official wiki! The wiki is edited by players like you, so you can help out by adding more information as you play. 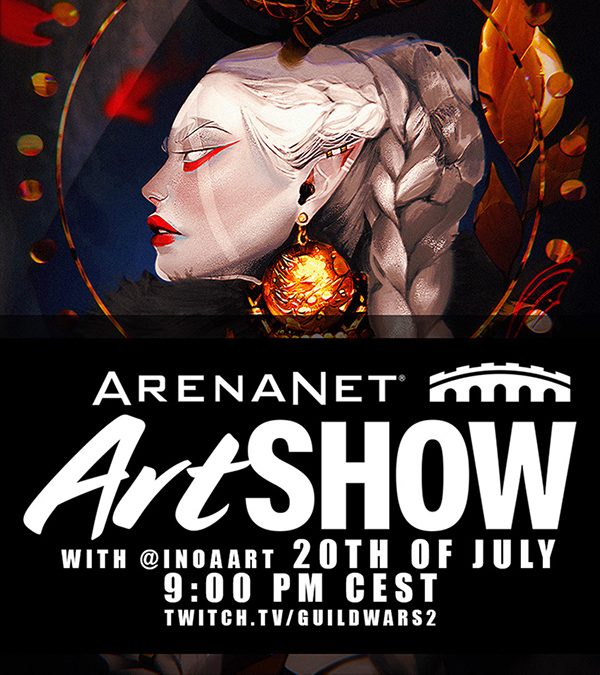