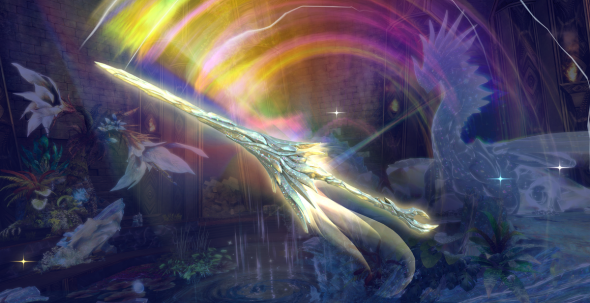 A Closer Look at the Guild Wars 2: End of Dragons Legendary Weapons

Hey, everyone! I’m Chelsea Mills, Senior Prop Artist and creator of many of the Guild Wars 2 legendaries, including Exordium, Nevermore, and The Binding of Ipos. As we announced previously, the launch of Guild Wars 2: End of Dragons™ will feature a set of sixteen new legendary weapons themed around the Elder Dragon Aurene. Legendaries are by far my favorite thing to create. Every single one is a fun challenge of finding something unique to feature as part of the design, and I am particularly excited about what we have in store for you with this set.

Today we’re going to tell you more about the narrative inspiration and design for upcoming legendary weapons, show off some surprises we haven’t talked about yet, and give you some information on how you’ll earn them in game. But before we get to the good part, here’s a quick refresher on legendary weapons in general.

What are legendary weapons?

Pieces of legendary equipment (including weapons, armor, back items, trinkets, runes, and sigils) are some of the most prestigious endgame rewards. They are a long-term goal for you to work toward, with a big payoff! Not only are legendary weapons unique looking with special visual effects, but they also have several convenient features not found on any other weapon:

Make your weapon look like anything you want—for free!
Legendary weapon skin changes do not cost transmutation charges, so reskin your weapon to your heart’s content.

Swap out those sigils without overwriting them!
Applying a sigil to a legendary weapon pops out the currently applied sigil and puts it in your inventory instead of it being lost.

Choose the stats on your weapon, anytime!
Legendary weapons have a customize option, which allows you to select from any of the stat sets in the game.

In Guild Wars 2: Heart of Thorns™, you, the commander, became the protector of a mysterious egg that ended up hatching into an adorable baby dragon named Aurene. She chose you as her protector and bonded with you. It’s been a long journey—you taught her to care for the residents of Tyria; you defeated Elder Dragons, a powerful lich, and even a god; and you grew together—in Aurene’s case, quite literally! She has now grown into a beautiful prismatic Elder Dragon, capable of filtering and controlling all the various types of dragon magic that she has absorbed after each Elder Dragon was defeated.

With Aurene being the prismatic dragon, able to refract the varieties of dragon magic she has absorbed, it seems only appropriate then for this set of legendaries to reflect that. Figuring out how to incorporate this into the design was a challenge—do we make the weapons change somehow based on certain circumstances to show the different dragon magic types? No, that wouldn’t have worked for multiple reasons. What then?

What if… What if we had multiple appearances per weapon? What if there was a base set representing Aurene and then versions for each of the dragons she’s absorbed magic from?

That’s right, we will eventually be releasing not one, not two, but six variations of new legendary weapons to go with Guild Wars 2: End of Dragons! It’s important to note that only the core Aurene set will be available on launch day, with the rest of the sets coming over time, postlaunch. There will be more information on how to acquire each version later in this blog.

Remember that part where I said I loved challenges? Yeah, this is definitely that. Making six different sets meant 96 unique weapon models we’d have to create. But think of the fashion wars! This has been a herculean effort by everyone involved, and I’m really proud of what we’ve accomplished.

Without further ado, here is an early preview of the greatswords from the other five sets!

Light through the Prism—Visual Effects

Hello! I’m Nathaniel Hubbell, a Senior Visual Effects Artist on Guild Wars 2. I’ve been lucky enough to work on a diverse array of different effects, from player skills to boss battles to cinematics.

Unique visual effects are an essential part of any legendary weapon, and the Elder Dragon legendaries are no exception! Each weapon set includes dozens of individual effects that help give it life, all of which have to operate together as one seamless whole. To make this work, the effects are designed to meet a series of specific needs.

First and foremost, they need to capture the essence of the Elder Dragon they represent. Each weapon tells a story about the character it’s based on, with the effects adding their own flair to that story. Second, the weapon and its effects need to blend harmoniously. It’s crucial that the effects showcase the weapon, not obscure or detract from it—we’re making legendary weapons, after all, not legendary particles! On a similar note, it’s important to strike the right balance between spectacle and finesse. The effects need to be impressive enough to make the weapon feel powerful and rare, yet refined enough to be readable during a chaotic battle. Lastly, the effects also have to look good against different backgrounds. Tyria is a big place—wherever you roam, your weapon should shine!

One example of how all these different considerations get integrated together is the death blow, a finisher-style hit effect that plays on enemies slain by Elder Dragon legendaries. This is a feature we created not only to add more impact, but also to reemphasize the Elder Dragons at moments of triumph. Lots of small details come together to highlight these moments in a clear, satisfying way.

Putting the dragon front and center, I built Aurene’s death blow around her ascended rainbow streak (a motif common to several effects in her set). Here the streak swoops down from above, leaving a crater of prismatic crystals over a defeated opponent. In this case, it was straightforward to avoid visually overpowering the weapon, since the effect isn’t on the weapon itself. However, in order to avoid blowing out melee weapons during close combat, I kept the bright hit-flash short.

Achieving the right level of overall intensity was trickier—the death blow needed to be big and exaggerated without turning every fight into a fireworks display. To solve this, the Visual Effects team coordinated with the Design team to control how frequently and against which sorts of enemies the effect displays. This allowed the death blow to be larger and last longer than a typical hit without constantly getting in the way. Finally, in order to make the effect work in a broad variety of environments, I combined bright, saturated elements, like the rainbow streak, with solid pieces that respond to in-game light, like the crystals. This helps ensure that the effects will stand out while also feeling appropriate to their surroundings, wherever they happen to appear.

With multiple legendary sets planned for eventual release, our work is far from over. Considering all the dragons’ different personalities, there are lots of opportunities to explore unique, varied effects. I’m excited about how the Aurene legendary weapons are turning out and equally excited by the fun challenges still ahead!

Howdy, I’m Steven McNally, the Rewards Team Lead Designer on Guild Wars 2: End of Dragons. Now that Chelsea and Nathaniel have given you some backstory on this sweet suite of weapons, you’re probably itching to get one—maybe even the whole set. So I’m here to give you the rundown of how you’ll do that.

For the collectors among you, that’s six versions of sixteen weapons (I hear you in the back saying there’s nineteen weapon types in Guild Wars 2, but it turns out Aurene is not a fan of aquatic weapons, so she’s vetoed them. Sorry, but I’m just not going to argue with a dragon over getting those in). That’s a grand total of ninety-six appearances.

You’ll note I said appearances, not weapons. Aurene is a prismatic dragon, and so her weapons are prismatic too. You’ll only need to forge each weapon once, then you’ll go on a journey with it to attune it to the magic of the other Elder Dragons. So all those amazing greatswords Chelsea showed us are really just the same greatsword attuned to different magics, and you won’t have to worry about spending tons of resources making and remaking these weapons.

Speaking of the resources, what are these going to cost you? Well, fair market value will be an option. Similar to the first generation of legendaries, the precursors and weapons themselves can be put up for sale on the Trading Post, so if you’re keen to have it right away, I’m sure some other players will oblige you. But for the rest of us living on two gold a day: as with previous generations, they start with a precursor weapon. Finishing the story journal in Guild Wars 2: End of Dragons will unlock the ability to learn to craft all of this generation’s precursors. You can make them for yourself or sell them for profit. Everyone can also earn a precursor weapon by completing the Living World Return achievements, so if you want a head start, get those finished!

Once you’ve got your precursor, you will need to present it along with some gifts to Zommoros through the Mystic Forge; some of these gifts will be familiar to anyone who’s looked into making a legendary before. Some gifts, however, will require newer resources, which can be found through activities such as fishing. None of them will require finishing renown hearts every day, but many of them can be sold on the Trading Post, so if you don’t like fishing, you can buy those resources from the players who fish all the time and engage with other activities to gather what you need.

And that’s it! You only have to craft a single precursor per weapon type, and no masteries are required (though there are a couple you’ll probably want to finish). Just play the story, gather materials, make your legendary weapon, and enjoy!

Until next time,
Chelsea, Nathaniel, Steven, and the Guild Wars 2 Team